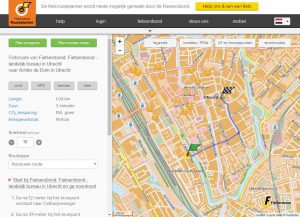 Starting in the year of 2003 Demis has been developing bicycle route planners. In close collaboration with the national cyclist organisation (Fietsersbond) and provincial governments we started with the province of South Holland and by now all of the provinces of the Netherlands are covered.

The Fietsersbond routeplanner is already the most complete bicycle route planner of the Netherlands since 2005, both for everyday use and for a cycling trip during the weekend.

In 2013 a new front-end of the routeplanner has been developed by TwoKings, as well as an app. The back-end, including the online editing tool, however is still being maintained and further developed by Demis.

Hundreds of volunteers are working day in and day out to keep the bicycle route network up-to-date, using the online GIS/network editing tool which has recently (2020) been updated by Demis. If you encounter a mistake in a planned cycle route or the map Let us know.

In the Fietsersbond routeplanner you can choose from different route types, such as Limited Stops, Racer Route and Car-restricted Route . You can even configure your own route type.

There are many Points of interest included, such as railway stations, bike parkings, obstacles, charging sites and ferries.

The Fietsersbond routeplanner has been used for creating its own maps, both digitally and on paper.

Available in many forms: the website, a mobile website, and apps for iOS and Android. With the widget you can offer the bicycle route planner from your own site.